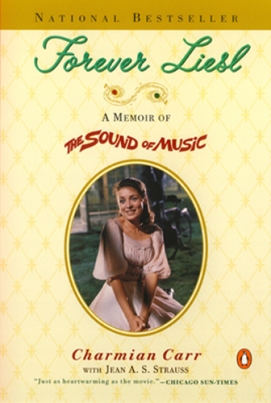 If you asked my mother which songs I sang the most as a child, she would tell you Top of the World, by the Carpenters, and Doe-A-Deer, from The Sound of Music.  In fact, several years ago when we had the thrilling opportunity to meet Julie Andrews at a book signing in Pasadena, that is one of the first things she told her.

I was embarrassed at the time, but quickly got over it, because I’m one of the millions of people around the world who simply adores The Sound of Music.  One of the really nice things is learning about what decent, upstanding people the young cast has grown into.  Forever Liesel, written by Charmian Carr, is a delightful account of what it was like to be a part of this beloved movie.  In a succinct but entertaining way, she talks about learning when she got the part, meeting the rest of the cast, and working with Julie Andrews and Christopher Plummer (on whom she had quite a crush.)  Unlike the rest of the “children,” she was of age where she could work longer hours, enjoy the Austrian location with less restrictions, and associate with the 2 stars off the set.

Unlike so many other young stars who shun the very vehicle that shot them to fame, all 7 of the film’s young actors still appreciate the positive impact that The Sound of Music had on their lives.  They spent years promoting it and making appearances without pay, enjoy having cast reunions, and regard each other with warm affection as much as if they were really brothers and sisters.  And, although most have left acting for other endeavors, they still have fond memories of their months working on the project.

Forever Liesel is not especially earth-shattering, but simply a fun behind-the-scenes look at the making of an iconic film.  It is a fast read that will make you want to cuddle up in front of the movie once again and enjoy it with new appreciation.