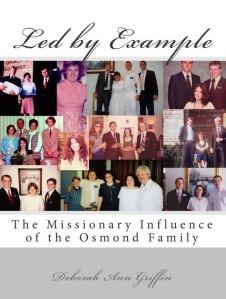 After 2 recent “Osmond” themed vacations, it was inevitable that I should read this book. I learned about it from one of the ladies whose story is featured and, at only 78 pages, it was a quick read on the airplane. Agatha Runyon, like many others, was impressed and influenced by this well-know family’s standards in a world that continuously calls such behavior “outdated.”

This is a family who has been in the entertainment industry for over 50 years and still strictly adheres to their religious beliefs. Sometimes they share those beliefs with others, but often it is their example and willingness to “walk the walk, not just talk the talk” that has piqued people’s interest in the Mormon Church.

In this compilation, 15 different people tell their personal stories of conversion to The Church of Jesus Christ of Latter-Day Saints. Because each story is told by a different person, it is impossible to critique the writing except to say that it varies between average and above. The common denominator is that each person was an Osmond fan during the 1960’s and 70’s. It was that pre-internet time when fan magazines were the craze and the only way for teenagers to learn about their pop idols’ personal lives. The Osmonds, to their credit, never hid the fact that they were a church-going family who put the things of God before the things of the world.

Many of the people featured came from homes of dysfunction or with no religious teaching. Besides their musical talent, the Osmonds–a large, loving family with two stalwart parents–attracted teenagers living in less-than-ideal situations.  “Mother Osmond,” in particular, was very generous with her time in reaching out to individuals who had questions about the Church.

Not all of the converts in the book have had personal contact with the family. Many simply admired them from afar and went seeking out missionaries and congregations on their own. The experiences are truly about conversion to the Gospel of Jesus Christ, not conversion to a famous family. The stories are often touching, with several of the people overcoming great obstacles prior to being baptized.

The main message, of course, is that whether we are famous or not, what we do and say gets noticed. If we are consistent, uplifting, and positive, those things can help to change lives.