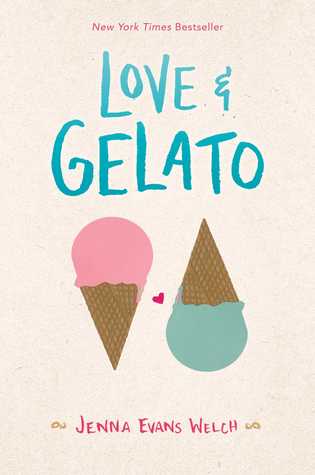 This cute story is the debut of Jenna Evans Welch, daughter of author Richard Paul Evans (The Christmas Box, The Locket, The Walk, and so many others.) When I started the book I thought the reader demographic was women, but I quickly discovered it is Young Adult Fiction. That is FINE. I’ve read enough YA Lit to see the way boundaries are constantly being pushed with sexual themes and coarse language, so it is comforting to know a new author like Welch is providing cleaner options. If I had a teenage daughter, I would have no problem recommending this book. (age 15+ IMHO)

Speaking of teenage daughters, on to the plot, told in first person by 16 year-old Lina Emerson. Lina, originally from Seattle, has just suffered the worst loss of her life, the death of her mother, photographer Hadley Emerson. Now, at her mother’s request, Lina is off to Florence, Italy to stay with her mother’s art school friend, the dependable Howard Mercer, who is superintendent of a World War II cemetery.

All of the adventures in Love & Gelato take place in just under a week, a dizzying pace for anyone over 21, but not so for an emotional teenager. The day after her arrival, Lina meets Ren (short for Lorrrenzo..be sure to roll that “r”) Ferrara. Ren introduces Lina to other ex-pat kids and possible classmates (if she decides to stay,) shows her Florence’s points of interest, and becomes Lina’s confidante on her quest to discover her mother’s connection with the city–and with Howard, who may or may not be Lina’s father.

Like most teenagers, driven more by heart and hormones than their heads, Lina jumps to certain conclusions without all the facts. But what I enjoyed most was the writing, which had plenty of wit as Lina sizes up each new person and situation she encounters.  Her “map” to the city is an old journal belonging to her mother. Those entries I found to be a bit flat and forced–the author is obviously trying to create a separate, distinct voice–but they were not numerous enough to detract from the overall story.

The sequel, Love & Luck, is also available, and centers around Addie, Lina’s American best friend with whom she frequently calls or video-chats for advice and support.

Love & Gelato is sweet and engaging, without being too saccharine or sarcastic, a tough line to walk with YA Lit. It is a quick read (one day for me) and a simple escape. I even found myself Googling some of the tourist spots mentioned, which was helpful. Now I just need to buy some gelato.