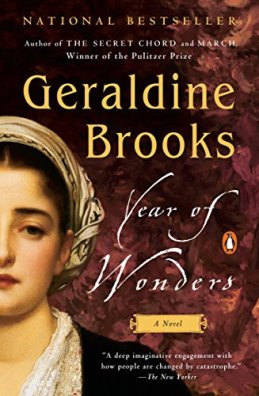 I had no idea when I listened to (75%) and read (25%) this book about the plague in the 17th century that, a few months later, we would be seeing the global panic we’re currently experiencing with the Coronavirus. The main differences are, of course, that the people then had greater cause to panic and medical technology was drastically inferior to what it is today.

Year of Wonders is about a young widow and mother named Anna. Like other books by Geraldine Brooks, the central female character possesses a quiet strength during a time when women were expected to be passive and mild. Anna does her best to support herself and her two young sons by working on her small farm, working at the parsonage, and bringing in a boarder now and then.

Over the course of the book Anna’s challenges and losses continue to increase, yet she never wavers, relying on her faith that she will see loved ones again, and her devotion to helping others in her social circle.

Geraldine Brooks has a talent for writing books in this Puritan setting, almost making them sound as if they were written in that time period. There was, sadly, a major misstep in the ending of Year of Wonders which led me to agree with other reviewers on Goodreads who stated that the ending felt like a completely different book. After investing so much time and energy into Anna’s story, hers is an odd and disjointed conclusion.