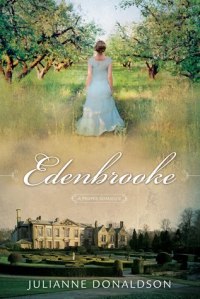 Two book reviews in two days is very unusual for me, but Edenbrooke, our April book club selection, was a quick and frothy read.  Whereas as The Immortal Life of Henrietta Lacks was like a steak dinner with baked potato, Edenbrooke is like a small bowl of chocolate mousse at the end of the meal.  That doesn’t mean it wasn’t enjoyable, because it was, but like chocolate mousse it is predictably light and far from life-changing.  Although I will say that it was a nice literary escape between two demanding books on my reading list.

Set in the English countryside, the story centers around the awkward half of a set of twins, Marianne Daventry.  She is attractive and unassuming, a composite of Elizabeth Bennett in Pride and Prejudice and Jo March in Little Women.  Her sister, Cecily, reminds me of a cross between Jo’s sister, Amy, and Blanche Ingram in Jane Eyre.  And therein lies a bit of criticism of the story–almost everything about it seems borrowed from the classic romance stories of that era.

There were a few twists that I did not expect, and some excitement at the beginning and the end involving danger and intrigue, but the story is, for the most part, quite predictable. It is more about the journey than the destination.

Still, to be fair, I will state again that I did enjoy it.  It is a clean story that manages to keep the reader’s attention. I sincerely wanted to find out everything that happened to the characters.  Would I recommend it?  I suppose.  One cannot read heavy, intense books all the time, and Edenbrooke was the perfect respite.