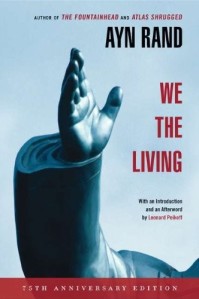 I was just reading a quote that says “The happiest people don’t have the best of everything, they just make the best of everything.”  A documentary called HAPPY (available on Netflix,) shows that people’s levels of happiness around the world is based on things other than material possessions, mainly family and a connection and contribution to society.  Years ago, a 20/20 special on happiness concluded that a large part is based on the control we have over our own lives.

Keeping all of these things in mind, I now reflect on the melancholy characters in Ayn Rand’s We the Living–her first novel. Focusing on Communist Russia in the post-Lenin time period between WWI and WWII, Ayn Rand is quoted as saying that this was the most autobiographical book she would ever write.  She also said that it was her intention to show the destructive powers of a dictatorial government on society no matter the time or country, whether it be Russia, Nazi Germany, or any other.

“Destructive” is the key word in defining Communism’s effects as we follow three main characters on their journeys to survive and endure a world that is quickly becoming more and more restrictive.  Kira, the character who the author loosely based on herself, arrives in Petrograd with her family after being away during the war years.  Akin to Ayn Rand, her bourgeois parentage is like a social stain as she tries to become part of the new society.  Leo, the son of a an executed government rebel, and Andre, an orphaned war vet on the rise in the government, are the two men she becomes involved with, each fulfilling separate needs within her.  Each begins with an agenda that changes as times become more desperate.

Ayn Rand excels in character development.  Even the government feels like it own character–perhaps the strongest, most consistent, antagonist of them all–as we see what happens when choices and ambitions of the Individual are stripped away.  This is a time when your devotion to country and state is everything, and your patriotism is constantly being questioned.

There is also a multitude of supporting characters–parents, siblings, cousins, friends–who, although taking on minor roles in the story, take on major roles in emphasizing what was happening at the time.  No one was immune to Communism’s control, and woe be to you if you did not yield to it. But “yield” is a relative term, because different people react in different ways to such control, and “self-preservation” has many faces.

Ayn Rand’s husband, who encouraged her to write this book, said she was the first person to escape Communist Russia who could write an honest, first-person account of what it was like to live there.  And she was quoted as saying that she could not fathom how some Americans thought that Communism was a noble idea, philosophically, while demonizing what was actually happening to the Russian people. But like we see today, using North Korea as an example, the government even tried to control the outside world’s perception.  Russia was probably more successful simply because of the limited technology and media influence of the time.

However, when you read this book you will see there is nothing noble about the government controlling every aspect of its citizens’ lives.  I hear people saying that the US is headed in this direction and I cringe.  If you think that, reading this book will give you an entirely new perspective.  We may not live in the “home of the free” in its most idyllic, shiny sense, but we are nowhere close to what these people endured and from which they are still trying to recover. This book is an eye-opener, and a crucial read.

1 thought on “We the Living, by Ayn Rand”